Gastrointestinal amyloidosis is a condition caused by the deposition of extracellular protein fragments. It can be associated with complex and diverse pathways and can have numerous manifestations and etiologies. Hepatic amyloid light-chain (AL) amyloidosis is a rare disorder characterized by the deposition of the insoluble amyloid protein in the liver. The clinical presentations of AL amyloidosis are frequently non-specific. In this case report, we describe a patient with amyloidosis, who initially presented with an unusual case of severe intrahepatic cholestasis, which followed a rapidly progressive clinical course that was associated with the acute hypercalcemic crisis. The diagnosis of amyloidosis was made after the liver and bone biopsies were performed. Our findings revealed that AL amyloidosis should be considered, when a patient presents with cholestatic hepatitis, renal failure, and hypercalcemia.

We reported on an unusual case of hepatic amyloidosis in a 57-year-old man, who initially presented with severe intrahepatic cholestasis and hypercalcemic crisis. The diagnosis of amyloidosis was based on a liver biopsy.

Amyloidosis is a condition in which insoluble extracellular protein fragments are deposited into the serum. The amyloid protein accumulates in different tissues, leading to structural and functional disruptions. 1

Amyloid light-chain (AL) amyloidosis is the most prevalent type of systemic amyloidosis. It results from monoclonal gammopathy, causing abnormal levels of immunoglobulin (Ig) light-chain proteins to be deposited in the affected tissues, such as peripheral nerves, kidneys, and heart, and the liver can also be involved. 2

Hepatic AL amyloidosis is a rare disease that presents with varying clinical symptoms, from the enlargement of the liver and abnormal liver function tests to hepatic failure, portal hypertension, and rarely, spontaneous rupture. 3 The severity and prognosis of AL amyloidosis depend on the type and extent of organ involvement and early diagnosis and treatment. 4

Herein, we describe an unusual case of AL amyloidosis in a 57-year-old man. He initially presented with rapidly progressive cholestasis associated with hypercalcemia.

In January 2020, a 57-year-old man with hypertension, chronic kidney disease, and hypothyroidism presented to the emergency department of Loghman Hakim Hospital in Tehran, Iran. He was admitted to the Hospital with anorexia, nausea, abdominal pain, generalized fatigue, and jaundice. He had also experienced an unintentional weight loss of 22 kg over two weeks. A physical examination revealed that he was in a state of confusion, and had generalized jaundice, hepatomegaly, and lower extremity edema. Written informed consent was obtained from the patient.

Table 1 column (a) represents the results of the initial laboratory tests. The symptoms suggested that the patient had a hypercalcemic crisis. The relevant treatment was administered, consisting of intravenous saline, furosemide, calcitonin, denosumab, and one-time hemodialysis.

The markedly elevated levels of alkaline phosphatase (ALP) and the total and direct bilirubin levels supported the diagnosis of hepatic cholestasis. The patient had no history of fever, renal stones, or fractures, and no significant risk factors for hepatic disorders. Further investigations were performed to assess the etiology of the low levels of parathyroid hormone (PTH) in the serum. Generally, low levels of PTH signify the presence of non-parathyroid hypercalcemia, which should prompt a detailed investigation for malignancy or other causes of the disease, including sarcoidosis or granulomatous diseases, such as tuberculosis. In addition, the levels of angiotensin-converting enzyme (ACE) were determined, urine and serum immunoelectrophoresis were performed and a chest radiograph and computed tomography (CT) scans of the lung and abdomen were carried out. It should be noted that a PTH-related protein (PTHrP) test was not performed, since it was not available. The results of the ACE level analysis were negative.

Upon consultation with a gastroenterologist, an upper gastrointestinal (GI) endoscopy was performed, revealing no specific abnormalities. An ultrasound and CT of the abdomen demonstrated that the liver was enlarged. Magnetic resonance cholangiopancreatography (MRCP) was employed to rule out any obstructions, strictures, or malignancies. MRCP revealed that there were no special abnormalities in the biliary system.

Due to the patient’s history of chronic renal failure and proteinuria and the clinical presentations of hypercalcemia and hepatic amyloidosis, the most common background pathogenicity was gammopathy and multiple myeloma (MM). Although the SPE and UPE did not indicate any evidence of monoclonal gammopathy, a bone marrow biopsy demonstrated hypercellular bone marrow for age with a few patchy deposits of amyloid protein and no increase in the population of plasma cells. Subsequent IHC staining of the bone marrow for lambda and kappa light chains implied the deposition of monoclonal (kappa) light chains, compatible with the results shown in the liver (figure 2. The clinical presentations of hypercalcemia, renal failure, and hepatic cholestasis combined with the results of the paraclinical investigations (liver and bone marrow biopsies) confirmed a diagnosis of systemic AL amyloidosis and hepatic amyloidosis.

The patient was referred to an oncologist for his progressive symptoms. He was a candidate to be treated with dexamethasone and lenalidomide, which are prescribed for AL amyloidosis. However, the patient refused the treatment. His clinical condition worsened due to the progressive increase of liver enzymes, leading to liver failure. The patient expired four months after the initial diagnosis.

In this report, we described a patient, who had AL amyloidosis and an initial presentation of severe intrahepatic cholestasis and hypercalcemia. It should be noted that treatment is the first step in managing acute and severe hypercalcemia. Clinical findings strongly suggested non-parathyroid hypercalcemia, indicating the need to search for an underlying malignancy. 5

Patients with gastrointestinal amyloidosis often present with non-specific symptoms of fatigue, weight loss, hepatomegaly, and elevated ALP levels. 3 Our patient presented with weight loss, hepatomegaly, jaundice, and elevated ALP levels. The highlighted symptoms were the dysfunction of the hepatic and biliary systems, caused by the deposition of an amyloid protein precursor in the hepatic tissue, and hypercalcemia, which resulted from gammopathy and the clonal proliferation of Ig proteins in bone.

Liver involvement due to light-chain amyloidosis can be the first indication of MM. MM causes extreme abnormal bone remodeling, and over 80% of patients with MM have bone disease. 6 In addition, 73% of patients present with anemia at diagnosis; 7 on the other hand, the rest 30% have renal insufficiency and hypercalcemia. 8 , 9

Autopsies have shown that up to 96% of patients with AL amyloidosis have hepatic amyloidosis. 10 AL amyloidosis is associated with a wide range of symptoms able to mimic other prevalent conditions. Therefore, the diagnosis of AL amyloidosis is often delayed. A prompt diagnosis and treatment of the disease require a tissue biopsy utilized to detect amyloid deposits. 11

Cross and others reported a 46-year-old woman, who had hepatic amyloidosis concurrently with MM and bone marrow involvement. 12 Yim and colleagues highlighted the poor outcomes and difficult management of two patients with hepatic amyloidosis. 13 Both patients initially presented with abdominal pain, hepatomegaly, and elevated ALP levels, and died due to severe hepatic impairment.

The main parameters related to disease severity and prognosis are early detection and management of the disease along with the type and extent of the affected organs. 4 , 14 Moreover, therapeutic strategies are based on the organ involved in amyloidosis and thus, are not the same. However, most patients are treated with chemotherapy or biological therapy. 15 A randomized clinical trial (RCT) implied that patients with amyloidosis, who underwent chemotherapy had higher survival rates and showed clinical improvement compared with untreated individuals. 8 In this case, our patient refused treatment with dexamethasone and lenalidomide, which are typically prescribed for AL amyloidosis.

The prognosis of patients with AL amyloidosis involving the liver is poor and the survival rate is less than two years. Elevated ALP levels can also predict a poor prognosis, 4 which is in line with our findings. Thus, the rapid diagnosis and delivery of appropriate treatments may improve the poor outcomes of hepatic amyloidosis.

The authors would like to thank the Clinical Research Development Center (CRDC) of Loghman Hakim Hospital, Shahid Beheshti University of Medical Sciences, Tehran, Iran, for their support, cooperation, and assistance with this study. 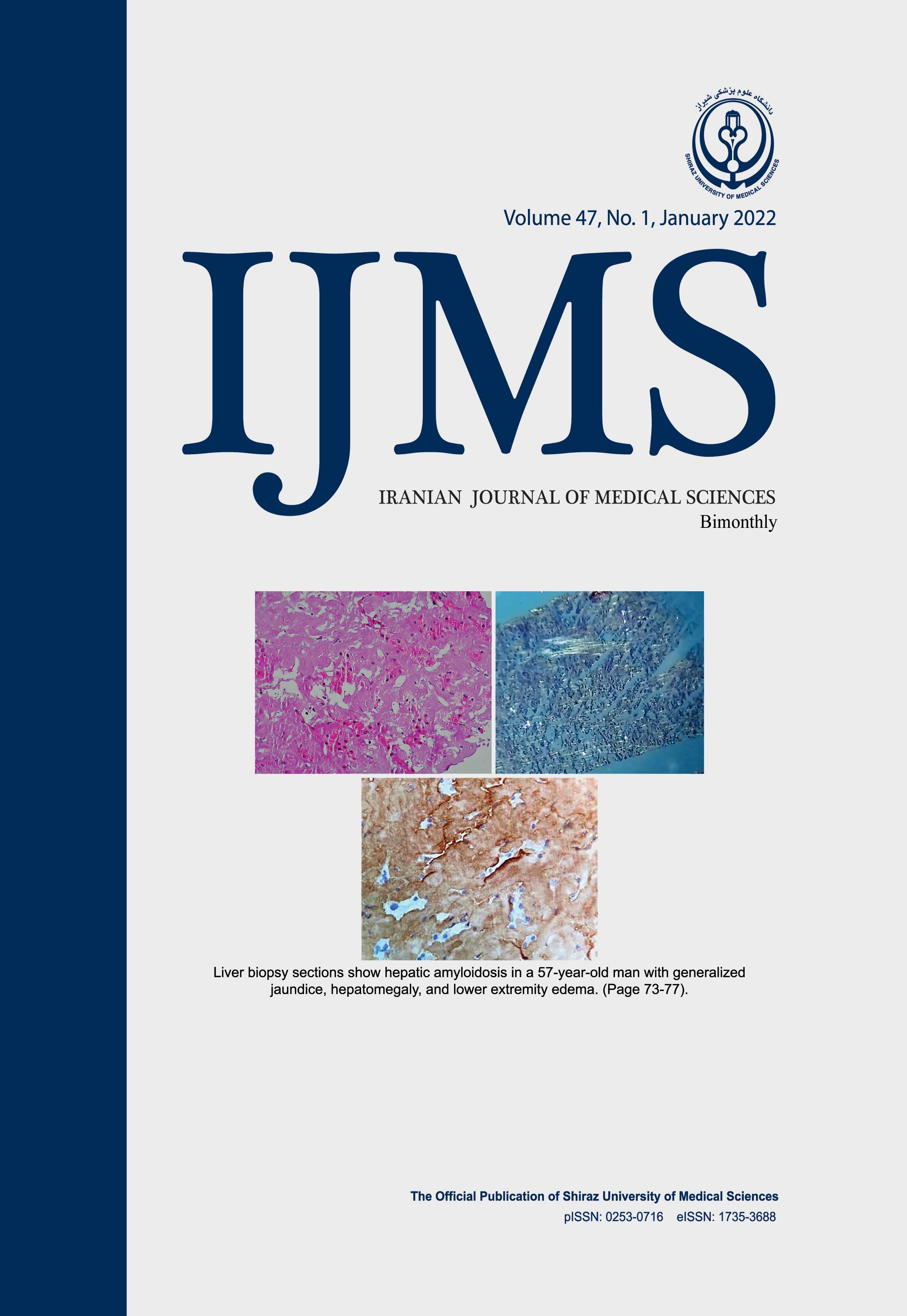