A Large Solitary Hemangioblastoma of the Lateral Ventricles: A Case Report and Literature Review

Hemangioblastoma (HB) in the supratentorial region of the brain is rare and only a few cases are reported on intraventricular HB. HB of the lateral ventricles is even rarer. We present a case of a 30-year-old man with generalized tonic clonic seizures. The brain computed tomography showed a 5.5 cm heterogeneous mass extending into both lateral ventricles with partial enhancement. Based on the size and imaging features, we present the fourth documented case of a large solitary intraventricular HB. Our approach to this unique case and some treatment complexities are also described.
Considering the rarity of the case and the patient’s imaging features, the present study provides a better understanding of HB and recommends HB to be considered in the differential diagnosis of masses in the lateral ventricles. In addition, some preventable pitfalls in the treatment of such complex cases are described.

Supratentorial hemangioblastoma (HB) is rare and only a few cases are reported on the intraventricular location of a tumor. HB of the lateral ventricle is even rarer. Perioperative complications are associated with the surgical treatment of a large and highly vascular intraventricular tumor.

Since 1935, the present study describes the fourth reported case and the largest solitary intraventricular HB in the literature. Because of intralesional hemorrhage, the tumor mass showed a heterogeneous enhancement, which is unusual for HB and poses a preoperative diagnostic challenge.

Hemangioblastoma (HB) is a benign vascular tumor of the central nervous system (CNS) and responsible for 2% of all intracranial tumors. 1 This tumor is associated with von Hippel-Lindau disease (VHL) in one-third of cases and the remaining are sporadic cases. The infratentorial region of the brain is the most common site of these tumors. 2 Supratentorial HB is rare and there are only a few reports on the intraventricular location of a tumor, especially in the lateral ventricles. 3 , 4 To the best of our knowledge, there are only three reported cases of solitary intraventricular HB of the lateral ventricles. Based on the size and imaging features, we present the fourth and the largest reported case with partial central enhancement. Furthermore, our approach to this case and some treatment complications are also described.

A 30-year-old man was presented to our medical center with a 12-month history of progressive blurred vision and headache. He had a generalized tonic-clonic seizure four days prior and was referred to us after an initial diagnostic workup. On examination, he had bilateral papilledema and positive bilateral Hoffmann’s reflex. We did not observe any neurologic deficit and his medical history was not significant. The brain computed tomography (CT) showed a 5.5 cm heterogeneous mass located in the midline position extending into both lateral ventricles with a small high-density area; most probably due to small intralesional bleeding (figure 1a). The magnetic resonance imaging (MRI) revealed a large heterogeneous mass extended to both lateral ventricles from the splenium of corpus callosum toward the foramen of Monro. The mass was hypo-isointense on T1-weighted and hyper-intense on T2-weighted images. Its enhancement was greater in the central portion of the mass with weak and irregular patterns (figures 1b and 1c).

Based on imaging features, our primary preoperative differential diagnosis was an intraventricular ependymoma. Other possible preoperative diagnoses were glioma and central neurocytoma. We decided to perform a right-sided trans-parietal trans-ventricular approach for tumor resection via the right parieto-occipital craniotomy. In the operating room, the patient was placed in a semi-lateral position. During surgery, when we reached the tumor bulk, a large mass with the signs of previous bleeding was observed. Intraoperatively, the tumor was found to be highly vascular and hemorrhagic. Finally, after removing all visible parts of the tumor and meticulous intraventricular hemostasis, a ventricular drain was placed into the right lateral ventricle. The postoperative brain CT scan showed a small remnant of the tumor in the left lateral ventricle (figure 1d). Histopathological report of the mass indicated HB, which was not among our preoperative diagnoses (figure 2). In search of other signs for the possible presence of VHL disease, we performed abdominal, renal, and ophthalmological examinations, as well as laboratory tests (e.g. 24-hour urine vanillylmandelic acid); the results were negative.

After the surgery, the patient was in good health without neurological deficits and did not show any of the signs and symptoms reported preoperatively. Four months later, the postoperative MRI revealed a near-total resection of the tumor with a small remnant in the left lateral ventricle. It also showed a right-sided fronto-parietal chronic subdural hematoma (SDH) due to the reduction of the mono-ventricular hydrocephalus of the right lateral ventricle (figure 1e). Subsequently, the SDH was drained via burr hole and we decided to monitor the remnant of the tumor through brain MRI. Two years later, a follow-up showed a small increase in the size of tumor remnants. However, considering the satisfactory neurological examination, we decided on patient follow-up only. Written informed consent was obtained from the patient for the publication of this case report and accompanying images.

HBs are highly vascular tumors of the CNS with benign behavior and two-thirds of the cases are of the sporadic type. The other one-third of the cases are associated with VHL disease, an inherited disease with multi-organ involvement (e.g., pheochromocytoma, endolymphatic sac tumors, renal and pancreatic tumors and cysts, ependymal cystadenoma, retinal HB, broad ligament cystadenoma). 5 HB is more common in the infratentorial area, mostly in the cerebellum, though the supratentorial region of the brain is a rare site for HB; accounting for 4% of the sporadic and 13% of the VHL-related types. 6

Supratentorial HB is more prevalent in men. 7 In the supratentorial region of the brain, HB of the lateral ventricles is very rare. 8 As presented in table 1, there were only a few reports on lateral ventricular HB. Only the case report by Diehl and Symon was similar to our case in terms of the tumor size, but was involved the temporal horn of the right lateral ventricle. 10 However, because of the midline position, our patient was bi-ventricular in both lateral ventricles resulting in mono-ventricular hydrocephalus due to the foramen of Monro obstruction. Both cases described solitary HB, but our case was of the sporadic type, whereas the case reported by Diehl and Symon concerned the VHL-related type.

Imaging modalities can be used to diagnose any brain mass and facilitate accurate planning of surgeries or other adjuvant therapies. Considering the availability of diverse imaging modalities, accurate preoperative diagnosis of brain tumors is within reach; at least it can assist in reducing the number of differential diagnoses. The MRI of HB has a diffuse enhancement, which indicates high-flow vessels in the mass; termed as flow void. Usually, HB is hypo-isointense on T1-weighted and hyper-intense on T2-weighted images. If the tumor is HB, it is unlikely to see calcification or peritumoral edema. In the MRI (with gadolinium-based contrast agent) of a patient with HB, homogeneous enhancement is the most prevalent characteristic of the imaging. However, as in our case and other studies, 16 , 18 , 19 partial enhancement is a highly unusual finding. Heterogeneity of the mass may indicate previous asymptomatic intralesional bleeding resulting in the expansion into the venous caverns; as found in our histopathological evaluation.

In patients with HB, angiographic study shows a highly vascular mass. If HB diagnosis is the objective, angiography should be part of the preoperative assessment or even pre-surgical treatment (e.g., embolization). Due to the unusual findings on the preoperative MRI images, we did not perform angiography and consequently, our patient had severe intraoperative bleeding. Therefore, it is recommended to perform an angiographic evaluation in the case of a huge intraventricular mass presented with hemorrhage and hydrocephalus.

In the post-surgical period, our patient developed a right-sided fronto-parietal chronic SDH complication, which required surgical treatment. We believe that the inevitable extensive decompression of the tumor and overtreatment resulting from ventricular drain insertion were the cause of this complication. In any ventricular procedure with preoperative hydrocephalus, placement of an external ventricular drain (EVD) followed by short-time tapering and subsequent EVD removal could be an option. The ventricular surgery by itself could be a cause of postoperative SDH, however, we believe that EVD placement may increase the possibility of its occurrence. 18 We recommend to place the EVD drainage bag at least at 15 cm height for slow and continuous drainage and then remove it as soon as possible. On a final note, choosing the right surgical trajectory to an intraventricular hemorrhagic mass is pivotal; narrower view channels through the interhemispheric transcallosal approach may be harmful due to the limited access to mass borders for controlling hemorrhage.

We present a patient with solitary HB in both lateral ventricles. The MRI only showed an irregularly enhanced imaging in the central part. The main complication in our treatment was the occurrence of a chronic SDH. Therefore, we recommend an accurate use of postoperative EVD to reduce such undesirable complications and to perform a preoperative angiography for the detection of large intraventricular hemorrhagic masses. 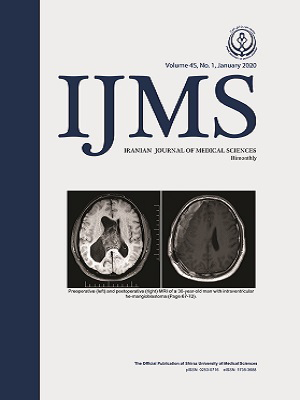